Portugal has no right-wing, left-wing parties, nothing, there’s a bunch of villains who come together to steal together  –  José Saramago 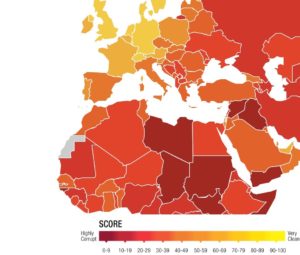 Perceived corruption in Portugal has for many years been just below the European average, according to the 2018 Corruption Index from Transparency International (www.transparancy.org).
This index ranks 180 countries on how corrupt their public sector is. The higher the number (0-100 scale) the less corruption. Portugal ranks 30 worldwide with a score of 64. Denmark and New Zealand rank first (score 88),  Somalia last  (score 10).

The reason for this standstill is the lack of political will and the ability to establish ethical conduct standards. This is reflected in the failure of the Parliamentary Commission on Transparency – established three years ago – to control members of parliament,  judges and attorneys. But also the government is to blame through its lack of vigilance in preventing abuse and unwillingness to punish corruption when it occurs.

The low number of convictions and the fact that 94% of the corruption cases are archived without trial, doesn’t help either to restore confidence in the authorities. ‘A national strategy to combat corruption – independent of the political colour of the government – is needed, believes João Batalha, president of Transparency and Integrity Civil Association (TIAC).

Former president Ramalho Eanes stated last month that corruption in the public service is a ‘complex problem that proliferates through society. Our civil society isn’t strong and autonomous enough against the state. The elected politician is more a delegate of the party than a representative of the voter and it is very difficult to change this culture.

Corruption costs the country at least 18 billion euros per year. That is about 8% of the GDP and more than the annual Health budget.
A recent inquiry by Eurostat under Portuguese civilians showed that more than 80% of the respondents were of the opinion that corruption is an essential part of the business culture. 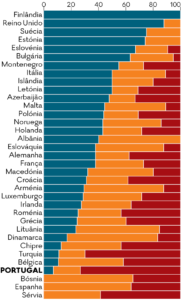 It is therefore not surprising that Portugal is the least compliant of 49 European countries in the fight against corruption. A report from the Council of Europe’s anti-corruption group (GRECO ) by the end of 2018 revealed that nearly three-quarters of its recommendations – in particular on political parties and the judiciary – were not fulfilled.
(red bars in figure)

Not only the Council of Europe is dissatisfied. The Organisation for Cooperation and Economic Development (OECD ) concluded at the beginning of this year, that the judiciary system in Portugal isn’t functioning properly and calls for special courts to judge corruption and white-collar crime. It also recommends an electronic declaration of interest register for all members of the government and public administration employees.