Five years after the peak of its economic crisis, Portugal’s future looks bright. There is more confidence, more consumption and there are more young people in college.
In December the country succeeded in paying off the last installment of the 78 billion euro loan to the EU and the International Monetary Fund (IMF). The accelerated repayment saves the country 1.2 billion in interest costs. 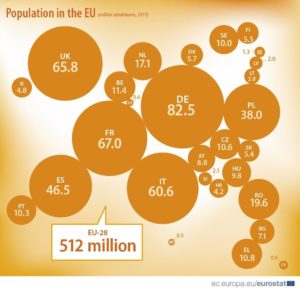 The resident population consists of 10,3 million people, that is 2% of the population in all 28 EU member states. One-fifth of the Portuguese (2 million) lives abroad.
As a result of a very low birth rate and a negative migratory balance, the number of Portuguese is decreasing, despite the fact, that in the last decade nearly half a million ‘new’ citizens – mainly from Brazil and Cape Verde – have been added.

Thanks to the increased life expectancy – 81 years on average – the population is not only shrinking but also aging. There are nowadays much fewer children under 15 years (14%) than elderly over 65 years (21%).

The country’s workforce is relatively low skilled. The majority (54%) has no secondary or higher education, much more than in the rest of the EU (16%).
Special in this respect is, that more women than men are in the possession of a doctor’s (PhD) degree (55%), therewith ranking 5th in Europe.

Unemployment has – since the crisis – been halved to 6,7% but compared to northern European countries the minimum wage is still low ( 676 euros per month ).

Furthermore, the percentage of temporary contracts (22%) is relatively high ( 14% in the EU).

Remarkable is the low number of women working at the police force (7,5%), with its second to last position – just before Italy – in Europe.

In digital terms, the country is also lagging behind. Two-thirds of the companies have a website (77% in the EU) and three-quarters of the households are in the possession of an internet connection ( 87% in EU). That might also be the reason, that by far the most popular girl’s name – Maria – hasn’t changed since ages.