The pig in Chinese astrology is tolerant and understanding, sympathetic and truthful. Pigs maintain order and authority and believe in justice.

Although Portuguese eat the most fish in the EU – over a kilo per person per week – pork remains extremely popular, especially in the north of the country. There – in Gimonde, near Bragança – you can even find a real pork museum (Museu do Bísaro), which says a lot about the national love for the beast.

Popular pork dishes are Leitão no forno (suckling pig – cooked for hours in wood-fired ovens with aromatic herbs), Bifana (pork steak in thin slices, often eaten on wheat bread called molete) and Rojões (cuts of pork from the thigh or belly, fried with lard and eaten with sauce of boiled blood and tripe).

There are many types of sausages (enchidos), encompassing an array of textures and tastes. Alheira, includes bread, chopped meat, and garlic. Morcela (or black pudding) is encased in jelly-textured blood, giving the sausage its consistency and dark colouring. Chouriça is a horseshoe-shaped smoked sausage, containing meat, blood, and pork fat of the indigenous Bísaro breed. Salpicão is also smoked but made primarily with pork loin.

In ancient Egypt, the pig was considered sacred and offered to the Moon, the Greeks honoured the goddess Porca and the Romans feasted on roasted piglets with honey.
Pigs – which descend from the wild boar (javali) – have been eaten worldwide for centuries, except by Jews and Muslims, who consider pork unclean. 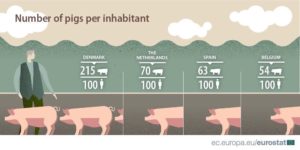 Pig production in Europe is concentrated in a few countries. Denmark has the highest number of pigs per inhabitant, Portugal ten times less.

In recent years meat consumption has been placed under a magnifying glass in view of climate change –  pork production generates four times fewer greenhouse emissions than beef – and carcinogenicity.

The consumption of red and processed meat – any meat that has been modified by salting, drying or smoking to improve its taste or extend its shelf life – has been extensively evaluated by the World Health Organization, which concluded that 50 gram eaten daily increases the risk of colorectal cancer. These findings support the most recent scientific recommendations to limit the intake of meat as much as possible. The less the better!

God created only water but man made wine – Victor Hugo

Portuguese drink the most wine worldwide, on average 1 litre per person per week.
Although no major producer, export – mainly to France, Brazil and the US – reached record levels last year. ‘Domestic consumption also increased substantially, due to a booming tourism industry,’ declares Jorge Monteiro, president of ViniPortugal.

Portugal’s wine culture developed in relative isolation for more than 2000 years. Many grape varieties – there are over 250 indigenous ones – do not grow elsewhere in the world.

The most famous wines are Port – a fortified and sweet wine from the Douro Valley, nowadays a Unesco world heritage site, Vinho Verde – a unique white wine from the Minho area, Dão – a quality wine, shown to age very well from growing in high altitude areas and the typical blends from the Alentejo region.

But would you still buy a bottle of wine with a label ‘alcohol causes cancer’ on it?
The Irish government – equating alcohol with tobacco – has recently passed a law (the Irish Alcohol Bill), that such a warning should be put on every bottle of wine, every can of beer and every flask of whiskey. As with cigarettes.
This kind of labeling is a thorn in the eye of the Portuguese wine industry, who fears a similar action in the EU.

‘To state that wine causes cancer is simply untrue’, says Georg Sandeman, chairman of the Portuguese Wine and Spirits Association (ACIBEV). ‘Northern countries want to impose their culture on us. In the north of Europe, people use to drink a lot in short periods of time (‘binge drinking’) and often without food. Here, wine is part of our culture, our gastronomy. Of course, excessive use should be reduced but not moderate consumption.’

The WHO, already since the 90’s, claims that alcohol raises the risk of cancer of the throat, esophagus, liver, and breast. More recent research shows that even moderate consumption is not without risk of cancer and cognitive decline.
In addition, the Organisation for Economic Cooperation and Development (OECD) warns, that alcohol is the third leading risk factor for disease and death after tobacco and hypertension in Europe.

The best advice, therefore, is to stick to the American Cancer Society’s guidelines. ‘If you don’t drink, don’t start and if you do drink, limit your consumption to one drink a day for women (who need more time to metabolize alcohol) and two for men’.