Tagus
Chronicle of an announced death?

‘Got a cold beer?’
The bartender from the restaurant Pedro dos Leitões in Mealhada looked straight into the weary eyes of a stocky man in a blue jacket with Ministry of Environment written on it
‘Sure man, here you are. Been busy?’
‘You say it. Took us ages to get decent samples.’
‘Samples? Whereof?
‘Of that paper mill nearby, in Vila Velha de Rodão. We first only got that stinking foam and had to go really deep into the river to get nice samples ’
‘Oh, you mean Celtejo?’
It had been in all the newspapers and every day on TV. Celtejo, the cellulose factory had caused a natural disaster last month by dumping enormous amounts of waste in the drought-inflicted Tagus, the country’s largest river. Thousands of fish had died and tourists fled the area. The excessive discharges had probably been going on secretly for years. The government had decided to a 50% cut in production until further notice and Francisco Ferreira from ZERO – the sustainable terrestrial system association – already claimed compensation from Celtejo of 150.000 euro for damage done. Cleaning of the mess was estimated to cost at least one million euro according to Portugal’s Minister of Environment,  João Matos Fernandes.
‘Yeah, that’s the one’, nodded the client and pointed to his empty glass.
‘But why more samples?’ said the barkeeper. I thought the case was closed and Celtejo the culprit. The party for People, Animals, and Nature (PAN) demanded yesterday immediate closure of the plant. At least that’s what I’ve heard on the news.’
‘It’s not all that easy’, grumbled the official. ‘We have to be very sure before we can shut down a big company like that. Imagine what is going to happen with its 300 employees? Vila Velha completely depends on that industry. Besides that, we have to verify if its production has been really halved.
‘OK, thanks for the beer. They are expecting the data in Lisbon as of today.’
He briskly walked around the restaurant but came to an abrupt standstill when he reached the parking lot.
‘Oh no’, he whimpered when he saw the rear window of his car smashed and his PC gone. 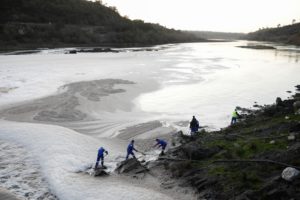 The Tagus descends from Spain
And crosses Portugal to pour into the sea.
Everyone knows this.
But few know what the river in my village is called
And where it goes to
And where it comes from.
And so, because it belongs to fewer people,
The river of my village is freer and larger.’                 (Fernando Pessoa, 1914)