What has Great Britain’s national dish to do with Portugal? A dish whose ingredients Winston Churchill called the nation’s ‘good companions.’ A dish described by George Orwell as the ‘chief comfort of the working class’.

It all began hundreds of years ago (www.eatmyglobe.com). During the Moorish occupation of the Iberian Peninsula Jews, Muslims and Christians in Portugal lived in relative peace. This all changed at the end of the 15th Century when King Manuel I of Portugal married Isabel of Spain, who made one of her marriage conditions the expulsion of Sephardic (meaning Spain in Hebrew) Jews from Portugal. Their religious practices had already been banned from her country in 1494.

King Manuel, who was not pleased with this prerequisite, came up with an alternative, that Jews would be allowed to stay if they converted to Christianity. Some did and became New Christians (Conversos), others fled up north to Amsterdam, from which they spread across Europe and even to the Dutch colony of New Amsterdam – nowadays New York – becoming the first Jews in the New World.

When they left, the Sephardic Jews not only took their religion with them but also their culinary habits. ‘Peshkado Frito’ (fried fish) was one of them. A selection of white fish – typically cod or haddock – deep fried in a light flour coating. It used to be prepared on a Friday in order to be eaten cold on the next day – the Sabbath – as religious laws prohibited cooking on Saturday. This ‘fried fish in the Jewish manner’ became very popular in England.

But how did fish and chips ended up being served together? There are many claims about who created the pairing. Most trace it back to the early 1860s when Joseph Malins, a Jewish immigrant, opened up a fish and chips shop in London. Other theories point to John Lee, a man from Mossley, near Manchester, who ran in 1863 a ‘chipped potato’ restaurant that sold the popular combination.

Whoever came first, what cannot be disputed is the rapid rise to success of a meal that was sold primarily to members of the working class. A nutritious and cheap dish that wouldn’t have existed without pogroms in Portugal. 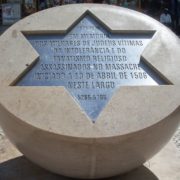