The place was deserted when he arrived late that night at the Humberto Delgado airport in Lisbon. Not the familiar cacophony of cars, buses, trolleys, and travelers. Just silence. Only a small group of tourists stood patiently waiting outside the Arrivals hall, glued to the screens of their smartphones. What the hell was going on? The onset of another revolution? The one from some 40 years ago had also started quietly, with carnations instead of bullets in the barrels of the guns. But in that case, he certainly would have heard something alike during the flight. And although the incoming aircraft had suffered some delay due to a drone teasing the airspace above the capital earlier on, that could hardly explain the total emptiness of the place. Looking to his right, he noticed a distant cab with its doors wide open and someone sitting up front. “I ‘am sorry to bother you sir but is it possible to give me a ride into town.” The startled driver looked up from his flimsy newspaper and replied annoyed. “That can be very dangerous! People may be dragged out of the car and beaten up. There is a national strike underway.” “But is there no possibility at all? I have to go to Campo Santana, it’s only 15 minutes”, the man insisted as friendly as possible. The cabbie sighed, folded the paper and gestured him silently to the back seat.
Once driving, he became more talkative. “The new law, that enters into force on November 1st, is a complete disgrace! Only in favour of the electronic platforms. Uber is taking 25% of the profit, stashes it in tax havens and doesn’t invest even one penny back into the country.” In the meantime, the car was building up speed on a desolate Avenida Almirante Reis. “Any political support for your cause ?” his passenger asked carefully. ”Only from the Commies, the Greens, and the Block”, the driver muttered. “The same parties that voted against legislation last July. And you know what? The worst of all is, that there is no quota for these electronic services, while the maximum number of taxis per municipality is strictly fixed. That sucks. No fair competition at all! But mind you, we will not stop until there is a decent deal for the nearly 14.000 registered taxis in this country. In 1976 – just after the revolution – we also had to defend ourselves against discrimination. Back then it took us 55 days to win.” He remained wary, when he drove all the way down to the Avenida da Liberdade, in order to join the growing queue of stationed vehicles and wait for the sun to rise. 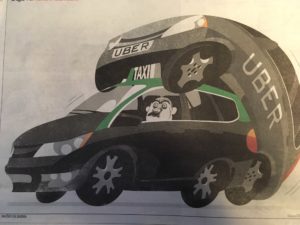