Once again police violence against an underprivileged community has hit the headlines. This time the battlefield is called Jamaica. Not the home of Bob Marley’s reggae but a ghettoized neighbourhood of merely black Afro-descendants in the southern outskirts of greater Lisbon.

It all started with a quarrel between two residents, but it was when the police arrived that the story exploded. Police officers using excessive violence were captured by locals on video, that quickly went viral.

Slums proliferated in Portugal from the 1970s onward due to immigration from the former Portuguese colonies of Angola, Mozambique, Cape Verde, Guinee Bissau and Sao Tomé & Principe.

‘It is in the outskirts where the segregation of Portuguese speaking African immigrants began. Many of these neighbourhoods are regarded as ‘sensitive’ by the security forces but that doesn’t correlate with crime rates. It’s all about racial bias within the police force’, explains social worker Antonio Brito Guterres in the British newspaper the Guardian. Although the state forbids to collect data on ethnicity or race, the police does make use of ethnic profiling as evidenced by confidential police reports from 2016.

This story of police brutality reminds of the well-known case from February 2015, when 17 policemen were accused of a number of crimes against a group of black young people in Lisbon’s quarter Cova da Moura. Four years later the public prosecutor has dropped the charges of racism, torture and falsifying testimonies against all police officers! 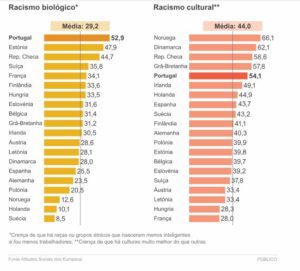 The UN Committee on the Elimination of Racial Discrimination has repeatedly declared being very concerned with racism in Portugal and the lack of measures taken for the benefit of the black immigrant population.
But with the continued perceived impunity of the police and the unwillingness to even consider the issue of institutional racism in the country, tensions between African descent communities and the security forces will remain.